Mary and The Quija Bord by Jose Prado 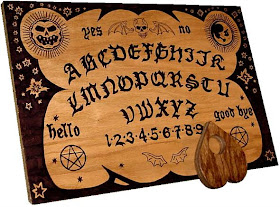 Photo of an English Ouija Board in courtesy of Wikimedia Commons

I performed an Exorcism for a woman named Mary who was experiencing Xenoglossy. She already had a dark entity tormenting her but it became stronger and received access to her body once she fooled around with a Quija board when she was 18. She sought me out when she was 40 asking for help because the Priests from her Church could not drive them away for long.

In Latin, they asked the Demon what its name was and in Latin she replied with 13 different names. The main entity identified itself as Icabod Issac (She said Icabod meant 'the glory is gone' and Issac meant 'laughter' I looked up the meaning of both names and it was correct.) she could also speak and write Latin without any formal knowledge of it, this ability left immediately afterwards.

She used to be a Wiccan but converted to Catholicism to please her Husband. Because modern day Christians are so fanatical, they banned her from receiving any out side help from mystics. The result being that they could not properly diagnose the problem all the way. At some point she actually said they had tag team Exorcisms for her because one Priest wasn't enough, the said Priests eventually gave up and even started avoiding her. Mary even reached out to local paranormal investigators which only spoke to her a few times and did not anything to help. Mary had suffered mental problems in the past so they shrugged her of as being insane and thus unable to help her in the first place, ignoring the fact that she was experiencing xenoglossy, making her  speak and write Latin fluently and psychic paralyzation, phantomania, which all pointed to being something more than just another insane lady.

After the exorcism her live changed totally, she lost the ability to read, write and speak Latin, her desire of self mutilation and suicidal tendencies went away, there were no more shadows at the foot of her bed and the phantomania also stopped.

Quija aka Ouija boards open spirit portals in a person's body. The original Boards called Talking Boards, Spirit Boards, or Planchette Boards, were used only by Spiritual Masters in Asia. No one outside of these Masters should attempt to use such a board.

The Quija board is a knock off version of the original board which had protections for the Master. Such as a filter so only specific or individual kinds of spirits could be summoned. Another was that the spirit portal could be sealed by the Master once their business with the spirit was concluded. The Quija board which was created by two American businessmen who based it off the Spirit Board from Asia, has no such protections. Any and all spirits both mortal and immortal alike can freely enter the person who is using it, sometimes even entering people that are just around those using it.

The possessed also often speak their native language in reverse or just speak in complete gibberish. Once I expelled all of those spirits from Mary, I sealed off the portal. I didn't believe her at first because she openly admitted to having a mental condition and trauma as a child. But when I was able to verify that she was speaking Latin and that no one who knew her had ever heard of her or had known her to speak Latin I started to suspect something was fishy. When she told me of her dealings with the Quija board I knew right away what was happening.